In 2019, UPMC declared any insurance associated with Highmark was henceforth out of network for any of their hospitals, because Highmark is opening up their own competing line of hospitals in Pittsburgh. Hospitals are non-profit enterprises that do not pay taxes in Pennsylvania. UPMC seeks to set the standard of patient care- and seeks to have created a class virtually unto itself. It costs $1000 to take an ambulance to a hospital.

In 1903, Georgist Elizabeth Magie invented the Landlord’s Game as a way to explain single tax theory and to reveal the unfairness and destructive implications of Monopoly. Almost 30 years later, Charles Darrow plays the Landlord’s Game, and obtains a written set of rules. Darrow used the rules to make Monopoly as it is known today, and sold it to Parker Brothers. After discovering that Darrow got the idea from Magie, Parker Brothers bought Magie’s patent. The decision made Darrow a millionaire.

The goal of HEALTHCARE MONOPOLY is to demonstrate the harm that can come with treating hospitals like businesses, designed to make the most money from their patients as possible. It is also a critique of the larger health care system, and when people have to make the choice between paying health insurance and surviving day to day. Like in original Monopoly, players play as both landlord and renter- in this case, hospital and patient. The player both treats and gets treated- rejects health insurance by claiming it is Out of Network, and uses health insurance to cover their hospital fees. The goal going into this was to give players several key choices-

I used Monopoly as a structure because of its history as a critiquing tool. I think it’s successful because, although there are winners, the metaphor for real systems exists and allows players to make connections to their real lives. The dialogue we as players would say: “I’ll pay my insurance,” “Can I charge like a million dollars now,” “You already went to ICU so you should be at full health,”

I also used Monopoly for its simplified, geometric colorful color designs and information relay techniques, which matched the signage and organization of the hospital. The game is meant to look appealing, and so is the hospital it is played in.

Everyone in the waiting room was too busy to play (Except one person for one round), but  the interactions Sophia, Josh and I made between each other got attention. We had set up right next to the cafe, so a lot of people were passing by and saw us. To critique myself, I would want to make this a larger experiment- the game can support up to 8 players. I want to visit different branches of UPMC hospitals and play the game in the various waiting rooms. 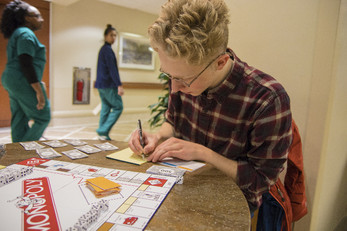 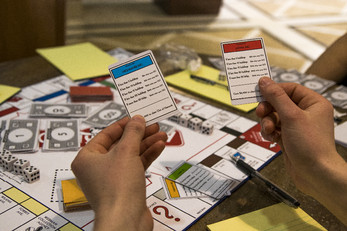 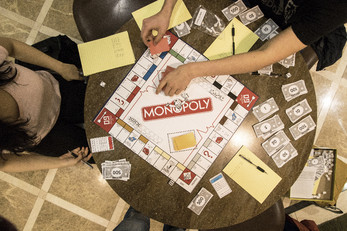